Richard Baker has a successful career in the entertainment industry as a manager and producer. Along with managing such comedic talents as Tim Allen and Drew Carey, he is currently an Executive Producer on ABC’s hit sitcom “Last Man Standing.” But Richard is concentrating on his art. His paintings are stark and complex with a subtlety. 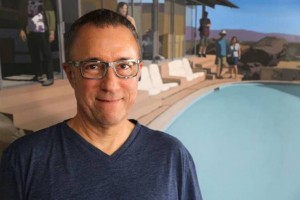