and we continue Part 2 with Terry Hastings and Dirty Laundry

Terry Hastings takes beautiful photographs. His models are captured in the elements – wind, water, earth, fire. The human form enhances the natural landscape. But Terry is no stranger to controversy. The images of male nudes and female needs has landed him in hot water. The controversy – “someone” found the work offensive. No explanation – just “someone.”

DIRTY LAUNDRY present 150 images that were deemed too controversial. The discussion over art, nudity, erotica and pornography takes center stage with Terry Hastings. 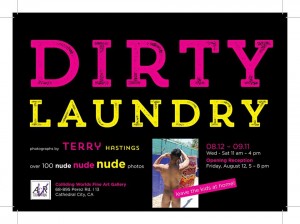