GENDER BENDERS presents the work of Cat Celebrezze and Nancy Floyd with the challenge to questions our notion of women.Cat Celebrezze’s work is entitled The Baphomet Queens and their Minions and Fairies with Boots. “The imagery of a female body with a goat head represents how many feel as they navigate the world: assigned into ill-fitting normativity, they morph into heretical hybrids, with all the complications and potential that such baffling brings. From that one study, an entire series emerged. Such imagery seems a timely response to our current era and all its failed monoliths, but certainly, our time is not the first, nor the last, to list into such bankrupt forms,” noted Cat.

Nancy Floyd’s She’s Got a Gun explores the complex role of women, firearms and perception. “I met women at the gun range, discovered Women and Guns magazine, saw Thelma and Louise, and learned that since the late 1980s the gun industry had been marketing more directly to women. This made me curious so I began photographing and interviewing gun women to understand their motivations’ “ continued Nancy. “. Over the years I became interested in the ways women represented themselves and the ways they were being represented. The book, She’s Got a Gun, published by Temple University Press in 2008, is a visual history of women and guns in American, 1850 –present.” “Once I began making portraits of gun women it became necessary to let them tell their story. The work was designed to show who these women were and why they made the choices they did, ” said Nancy. 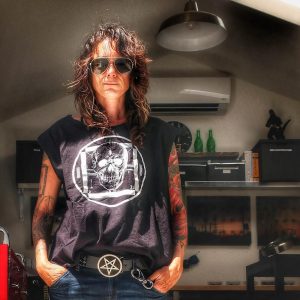